Some may consider the skill of how to start a fire with flint and steel to be advanced, used only by wise old sages and mountain men… but that’s not true! It’s incredibly easy; even my grandma could do it! How To Start a Fire With Flint and Steel

The flint striker is just an ordinary piece of carbon steel, or a metal alloy with a high content of iron. It is shaped in such a way that it allows you to fit your fingers through it like a knuckleduster which serves to protect your fingers from being sliced open by the sharp piece of rock that we use as a striker.

The concept of how to start a fire with flint and steel might seem intimidating to those that aren’t familiar with the practice. The truth is, it’s just an older variation of the ferrocerium rod. It works in very much the same way, but it’s value shouldn’t be underestimated as an emergency back up. It’s a good idea to get acquainted with these practices.

To create sparks we need a tough, sharp rock such as flint, chert or quartz to shave off incredibly thin pieces of metal from the carbon steel. Where can you find these special rocks? Wander around the forest or scan the water’s edge for a few minutes and you’ll bump into some sooner or later. If all you can find are smooth clumps, then just smash a piece off of it with another clump to create a thin, sharp flake of flint. 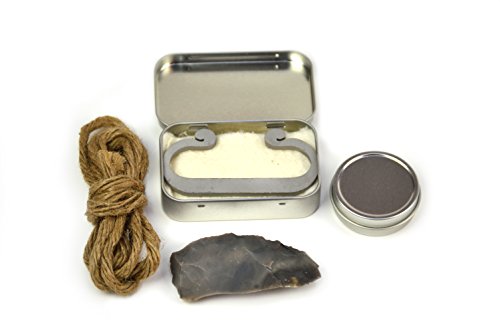 Strike the flint with the steel at a glancing acute angle. Strike it hard; you need to strike it with enough force to actually shave the metal off. Don’t tap it;  give it a bit of a whack but make sure it’s a glancing strike that just grazes the flint; otherwise you’ll just dent your striker, break your flint and create zero sparks. Takes about 5 minutes of practice to get it the technique down correctly, easy peasy right?

There are three ways to strike.

Don’t forget that you will need tinder, kindling and fuel, and knowledge of the right types of firewood to use for your fire. Learning how to start a fire with flint and steel is an easy, but critical, skill for when SHTF.

To better understand the mechanics of how to start a fire with flint and steel quickly, check out this great video from the Pathfinder School: