The use of radioactive material for energy generation, military purposes and medicine has become internationally prevalent over the past decades. The destructive potential of radioactive material is inherently dangerous. It is realized only when it is taken out of a controlled environment. For example, following an accidental or intentional nuclear reactor meltdown, a radiological ‘dirty’ bomb, or even a nuclear detonation.

The ongoing race of unstable regimes to obtain nuclear arms fuels these risks. Most worrisome is a scenario in which terrorists acquire or fabricate a nuclear weapon. As a result, there is an ever-growing risk of radiological catastrophe. Likewise an increasing need for radiation protection in preparation for these scenarios.

According to a report by the U.S. Government (National Planning Scenarios, March 2006), if terrorists were to ground detonate a 10-kiloton nuclear bomb in downtown Washington D.C., the blast would kill approximately 15,000 people.

Even more disturbing is the resulting gamma radiation (Fig. 1) leading to the death of up to 190,000 civilians. A 10-kiloton nuclear explosion would be roughly 5,000 times more powerful than the truck bomb that destroyed the federal building in Oklahoma City in 1995.

First, we must understand the dangers.

Ionizing radiation can be classified into two categories:

Gamma rays are best blocked using materials possessing high atomic numbers and high density. That is why you get a lead apron when doing an X-ray at the dentist’s office.

Radiation Protection While Bugging Out

After the catastrophe occurs, whether it was a city center terror attack or a nuclear facility accident, you might find yourself trying to get out of the irradiated zone as soon as possible.

If you had everything worked out in advance, you’d know exactly where to go (maybe have an underground bunker ready?) and what to do! You are prepared.

While hazmat suits, respirators, and potassium-iodide tablets help to protect from internal contamination of radioactive materials, what kind of equipment is available to protect you from the most lethal aspect of the catastrophe, the gamma radiation, and its fundamental danger: Acute Radiation Syndrome?

Acute Radiation Syndrome (ARS), also known as Radiation Sickness, is a serious illness that manifests itself when the human body receives a high dose of ionizing radiation over a short period of time (usually several hours).

Many casualties of the Hiroshima and Nagasaki atomic bomb detonations in 1945, and many of the firefighters who first responded to the Chernobyl nuclear power plant accident in 1986, became ill with ARS according to the CDC.

In Chernobyl, first-responders wore makeshift lead sheeting for protection. This type of shielding was inadequate for blocking gamma radiation.

The probability of survival of those inflicted with ARS decreases with escalating radiation dose. Most of the people who do not recover from ARS will die within a few weeks to a few months after exposure. The primary cause of death is the destruction of the person’s bone marrow.

When exposed to radiation levels of up to 1000 cGy, bone marrow tissue will sustain most of the damage. The median lethal dose of radiation in the human population is around 400 cGy.

As a result, protecting the bone marrow will provide a 2.5-fold increase in the median lethal dose. Consequently, the OECD/Nuclear Energy Agency recommends bone marrow shielding as a means to protect emergency responders in severe accident management.

How can you protect yourself from gamma radiation while bugging out? StemRad, an Israeli company, claims to provide the answer. They designed their product, the 360 Gamma (Fig.2), to provide shielding to strategic concentrations of bone marrow without limiting mobility.

The design is an outcome of the need to protect what’s important. Bone marrow is spread out in the human body. Remarkably, the hip region contains 50% of this crucial tissue.  The iliac bones of the hip are very attractive targets for protection.

Top scientists back StemRad including three Nobel Laureates. Among their other projects, they are developing a radiation protection suit for astronauts together with Lockheed Martin. This means the scientific aspect of their work is sound.

Feasibility in a SHTF Scenario

The total weight of the 360 Gamma is around 30 pounds. I took it for a two-hour hike, carrying some water and a small backpack with some snacks and basic equipment.

I found that the weight is well-distributed, making it similar to wearing a good (although heavy when uphill climbing) hiking backpack.

It is also compatible with any other personal protective equipment (PPE) you may already own such as a hazmat suit or a respirator which I would also recommend (and don’t forget to take potassium-iodide tablets as well). Unfortunately, these are not cheap. 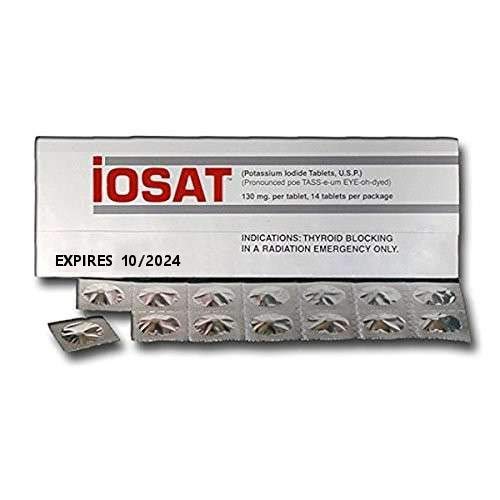 Aside from protecting bone marrow and reducing the risk of radiation sickness, the belt-like design covers other sensitive organs in the vicinity like the colon, small intestine, and in the case of females, the ovaries.

Reduction in dose to these extremely radiosensitive tissues is beneficial in preventing radiation-induced cancer even at low doses. Even after getting to safety, wearing the 360 Gamma while conducting activities outside of the shelter which results in protracted or intermittent radiation exposures will decrease the incidence of cancers over the lifetimes of exposed individuals.

Avoiding going through irradiated areas is the sensible thing to do, both to avoid ARS caused by high dose gamma radiation and to reduce the chance of cancer.  However, we cannot know when or where a nuclear catastrophe or attack will occur.

Have a 360 Gamma on-hand for each member of the family at home or in a vehicle. Along with other radiation counter-measures as part of a bug-out kit, this is an excellent way to be prepared for these situations and survive.

This arms you with state-of-the-art equipment to safely shelter-in-place or evacuate to a safer location. In a SHTF scenario, you don’t want to be stranded waiting for help that may or may not arrive.

Key Response Planning Factors for the Aftermath of Nuclear Terrorism

What Does Radiation Poisoning Do to Your Body?

What is Alpha, Beta and Gamma Radiation?

Jim Kent from StemRad graciously provided this article to SHTFDad.