Do you have concerns about having adequate shelter for you and your loved ones in case of sudden survival situations? Is bugging out not a viable solution for your family? Maybe you wish you could have an underground bunker, but the ready-made solutions are just too cost-prohibitive. If so then perhaps you should consider these DIY underground bunker plans to help alleviate the cost. Not sure where to start? Keep reading, and learn how using plans you can find online will make it easy to build your own backyard bunker.

Most folks are quite capable of constructing things if they will put forth the time and effort into properly researching the subject matter. Things to do Before Building an Underground Bunker

In building a DIY shelter, the first step in almost all areas is to obtain a permit for construction. You will also need to know where any pipes and utilities are buried before you can think about digging any holes.

The utility companies will generally provide you with this information at no cost. They often come to the site and mark the locations of their underground utilities for you if they are determined to exist within your construction zone.

You should draw up a set of plans to obtain the permit and for you to work from later. The recommended size of shelters and bunkers is 10 square feet of floor space for each person.

How to Build a Bunker Most people will want to hire or rent heavy equipment for the digging work, but digging by hand is certainly an option. You’ll need to excavate the hole a bit bigger than the planned structure will be. That way you have room to work around it during construction.

Concrete is the strongest and most cost-effective material but others are possible as well. Steel is sometimes used instead of or in conjunction with concrete.

Wood is not generally a good choice due to decomposition. Treated wood will last longer but will constantly leak poison. Wood really doesn’t have the strength to safely support the dirt above and at the sides anyway.

While digging you may encounter obstacles such as boulders and underground water. Boulders can usually be removed by equipment or blasting. Underground water, on the other hand, is a problem that is difficult to deal with. It’s usually best to just dig somewhere else. The underground water discovery might be a nice potential source of drinking water later on, though. 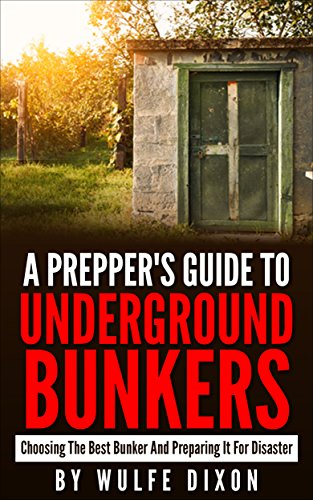 A Preppers Guide To Underground Bunkers: Choosing The Best Bunker And Preparing It For A Disaster(Urban Collapse, Prepper Survival Guide, Preppers Pantry) 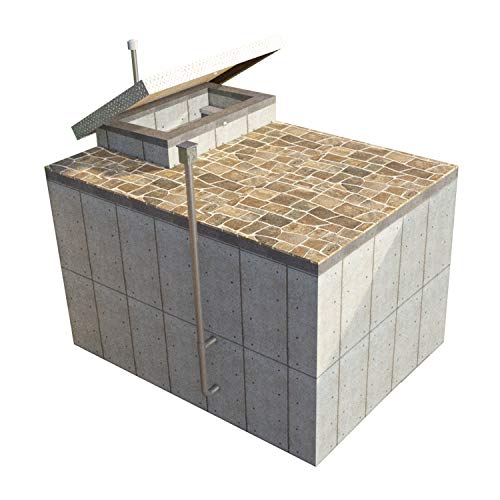 Waterproofing your shelter should be a priority. You can do this by using plastic sheeting to keep water from invading the walls and ceiling from heavy rains and flooding.

If you don’t intend to build your DIY bunker underneath your house, it might be a good idea to think about making it difficult to locate by potential enemies and busybodies.

There are ways to hide it and soundproof it which will make the occupants more secure. Some people plant trees and bushes at the location including at the entrance to make it less conspicuous.

Taking advantage of, or creating, advantageous landscaping can provide cover for the DIY bunker.

For more information on building a DIY underground bunker watch the video below:

Prepping & Survival Supplies on a Budget: Embrace your Inner DIYer

Your major priority in any survival situation will be water. If it is possible to construct a self-contained water system within the structure that is the best option. At worst, familiarize yourself with the best water purification methods.

Rainwater collection and groundwater purification are great ideas whenever possible. Otherwise, you will need to store enough water for the duration of the bug-in scenario.

Food needs to be planned for and stored properly for long-term usability. There are many options for food such as freeze-dried, canned, etc. This food should be rotated before its expiration date to keep from wasting it.

Ventilation is important to plan for. A second entrance is a good idea so that you have an additional exit in case something blocks the main entrance.

Other bunker supplies such as medical, sanitation, security, and even entertainment are essential if you want to last more than a day or two.

It’s probably a good idea to hire an electrician to run electricity into your DIY bunker if you need it.

Generators and other off-grid methods are also popular with survivalists. 12 volt systems are popular and safe to work with for the DIYer.

How much does it cost to build a DIY underground bunker?

It's possible to DIY a small backyard underground bunker for less than $1,000, but don't plan on staying longer than 24 hours or being comfortable, for that matter. If you intend to ride it out for several days or longer, plan on spending at least $25,000.

How much does it cost to buy and install a ready made bunker?

How big should my bunker be?

Ideally, you will want 10 sq ft of floor space per person for extended stays.

What basic preparations do I need to take before building an underground bunker?

Get a permit, draw up plans, rent heavy digging equipment (if you can), determine what the bunker foundation will be made of (concrete, steel, wood, etc) and plan for what supplies you will need.

Should I DIY or buy my underground bunker?

This is a question of time vs money, i.e. would you prefer to save money and DIY or save time and have someone else build it? A DIY bunker is a considerable time investment.

This post was graciously submitted by Cory Thomas. Cory has a deep passion for survivalist techniques and disaster preparedness. This stems from his childhood upbringing with military veterans. While he wasn’t able to serve his country due to disabilities that hindered him from serving on the front-lines with my friends and family, he learned all he could from them and still does. Cory spends a great deal of time out of the house and in the woods with his veteran buddies in order to learn all he can from them. The site he runs is his way of sharing the knowledge that they’ve shared with him so freely.

If you’re interested in gathering more information you should spend some time reading the articles at survivethewild.net!