Home / Bunkers / Where to Find Underground Bunkers for Sale

Where to Find Underground Bunkers for Sale

If you’re committed to providing safety for your family in an extreme situation, you’ll need to look up underground bunkers for sale. You might want an underground shelter to complete your prepping plans, or because you believe an imminent event will require you to head underground. With that in mind, let’s look at the best companies that manufacture underground refuges for preppers.

In my research, I found several manufacturers that provide bunker components, as well as move-in ready luxury units. As a result, this will provide you with a good starting point to understand what is available out there.

I have attempted to be inclusive and as broad reaching as possible in the shelters presented. However, each of the manufacturers below will have additional shelters and options that may better fit your needs.

Let’s start with several low-cost options. These are small, self-contained systems and include storm shelters, bomb shelters, and fallout shelters for sale.

The primary goal of this category of bunker is to provide a refuge from bad weather (read tornado). In these bomb and storm shelters for sale, you and your loved ones can hunker down for a few hours to escape an immediate threat.

Consequently, at this price point, comfort and space for food and water will be at a minimum. In most cases, these low-cost shelters will be delivered as a complete unit. That means that unless you are in a remote area, delivery and installation will be visible by others. 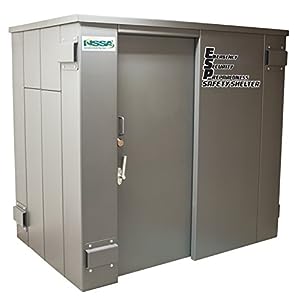 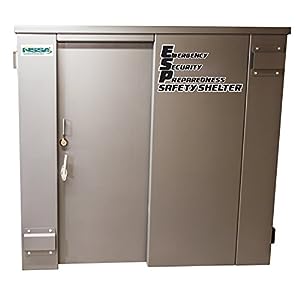 The Rising S Company sells “residential” bunkers for a wide range of uses. Their most inexpensive models include 10’ x 10’ of floor space and are $39,500.

These models include bench seating, LED lighting, fresh air vents, a TV with DVD player, and a restroom. You can upgrade these with beds, water storage, and usage (toilet, sink, etc.) security upgrades, and electric generators.

The Rising S Company has other “residential” models up to 10’ x 30’ to best fit your needs of space, storage, and family/team members to accommodate.

This series of bunkers ship with the critical structural components (all supporting beams, doors, hatches). You’ll be responsible for laying up the concrete blocks and building the walls by pouring concrete.

The use of concrete will help you reduce the cost of the shelter dramatically. This cost savings allows this series to be shipped with upgraded air filtration systems (Safe Cell brand 60 CFM NBC filtration system), a feature not included in most storm shelters for sale in this price range.

While these bunkers require a considerable amount of work to install, (either by you or by a hired professional), you’ll save money. You’ll also be able to add to the security of the operation.

Atlas Survival Shelters is the stalwart of the doomsday bunkers for sale world. Their 10’ x 13’ culvert system (10’ diameter culvert) is regularly priced at $49,999 (at the time of this writing this system is discounted to $34,999).

This unit comes with:

Atlas Survival Shelters offers a series of culvert shelters from this 13’ length up to 42’. As the length increases, the area (and the ability to store more bunker supplies or more people) increases. The largest shelters include additional points of egress (e.g. escape tunnel) as part of their increased cost.

Designed to be installed either stand-alone or under an existing structure, the Nado shelters can be accessed through an AR500 steel hatch.

Each shelter comes with an NBC air filtration system and can optionally include a toilet, bunk beds, gun racks, etc. Installed 14’ underground, these shelters provides a stable 60 F, depending on your region of the country.

Terra Vivos is a survival community billed as “The Backup Plan For Humanity.” This repurposed military ammo depot offers 2,200 square feet of floor space for $35,000. And if you have extra funds, you can also purchase or rent additional finished space.

Their inaugural location (they have several) is located in the central United States, and it includes 575 bunkers spread across 18 square miles.

These will cost between $100,000 and $500,000 dollars and primarily benefit the owner with additional living space. Many of the above manufacturers have shelters in this price range.

The Silver Leaf series includes multiple rooms including a dedicated kitchen, master bedroom, second bedroom, and a bathroom with shower.

The water system includes a water inlet and filter, an on-demand hot water system (hot shower anyone?), a grey water management system (tank and pump) and a composting toilet.

These shelters also come standard with an NBC air filter system and a solar system with a battery bank.

The basic Xtreme series is a combination of multiple independent shelters configured as connected “rooms” in your bunker. With the increased size comes multiple configuration options. One such configuration includes multiple bedrooms and bathrooms and dedicated rooms for storage, workshops, power generation, and hidden safe rooms or vaults.

Their 10’ x 40’ bunker (starting at $200,000) includes access via a security hatch and stairs as well as an escape tunnel. The NBC filter system includes a blast valve and an independent fresh air fan.

The water system includes both freshwater and greywater management systems.

Built in the same manner of their smaller bunkers, the custom series includes additional space with a variety of options:

The custom bunkers can also have their power management systems extended to include:

Atlas Survival Shelters include several variations on the culvert theme. These include multi-plate corrugated culverts and watertight shelters (designed for regions of the country with high water tables).

These more expensive systems are comprised of larger shelters. The 12’ x 48’ Atlas Survival Shelter “Big Boy” is priced at $129,999.

The Big Boy is equipped with:

I am considering luxury doomsday bunkers for sale as those that begin at over $500,000. Then the sky is the limit.

These shelters include not only extensions of those already discussed, but they’ll also include shelters in survival communities and other ready to move in shelters.

The DEFCON Bunkers company sells a wide range of shelters from inexpensive 8’ x 8’ units to the 16’ x 40’ (and larger) DEFCON 2 bunker. This all Stainless Steel bunker starts at $490,000, has 4 separate rooms and is entered via AR 500 bullet resistant doors.

The generator room is EMP shielded and the air filtration system is NBC rated. The water system includes both water storage and a water inlet (e.g. from a well) as well as a composting toilet and greywater storage and pumping system.

The kitchen includes a full sized sink and kitchen table. All lighting is 12 volt LEDs and the shelter includes a TV and DVD player.

This shelter includes extensive space for sleeping quarters (bunk beds for up to 100 people), multiple dining and recreation rooms, workout rooms, hospital, and armory. Each area is independently sealed via doors, and each bunk room has an escape tunnel.

For those with a little more spare change burning a hole in their checking account Rising S Company sells a complete line of larger and more extensive luxury shelters.

These include the maxed out $8.3 million dollar Aristocrat shelter.

With living space for 50 people, the Aristocrat has multiple master bedrooms, dining areas, a greenhouse, and an above-ground safe house.

The Aristocrat can be configured with a pool, bowling alley, and a gun range for recreation. The vehicle storage area comes complete with a motor pool and workshop. A separate wing of the shelter encloses the power system.

Ready to Move In Luxury Bunkers

The final category of luxury doomsday underground bunkers for sale is those that come ready to move into. Some are existing shelters for sale, while others are sold as a part of a larger survivalist minded community.

Our initial example is Silohome, which offers missile bases (read as nuclear bunkers for sale) repurposed as bunkers.

Our next example is a nuclear bunker for sale that is completely finished and ready to move into Atlas E missile site.

Starting at $4.5 million dollars for the 3,500 square foot luxury suite within a repurposed missile silo, Survival Condo is the pinnacle nuclear bunker for sale.

The shared space condo is one of several within the 20,000 square foot silo.

The luxury condo can support up to 10 people and has a high-end kitchen, 50” TV, home automation system, and biometric keyless access.

For those who wish to have a more traditional look and feel to their shelter this Las Vegas doomsday bunker for sale includes a little extra under the hood if you have the money (currently priced at $18 million).

No matter your reason for going underground there are many options to make this dream a reality. No one size fits all here.

You can purchase components and build your own underground bunker. Or purchase a completed unit where all you need to do is dig the hole. Or you can buy into a complete community (including bar/lounge, and general store).

All levity aside, an underground bunker is no laughing matter and should be considered seriously. Thankfully others have taken it just as seriously and are ready to provide you with the tools and materials you need to make your dream a reality.

How much do 'Low Cost' bunkers cost?

How much do 'Moderate Cost' bunkers cost?

How much do 'Luxury' bunkers cost?

The sky's the limit with Luxury bunkers. We have seen them go for as high as $30 million.

How much do 'Ready To Move In' bunkers cost?

Move in ready survival bunkers can go anywhere from $35,000 for bare-bones survival condo to $18 million for a traditional home with a built-in doomsday bunker.

What is the best location for an underground bunker?

A deeply rural area is best due to the ease of maintaining operational security and avoiding regular foot traffic by individuals or groups of people.

How far from home should you build an underground bunker?

Close enough to allow you to visit several times a year is an optimal distance. This ensures that you will check its security and be able to keep it stocked and rotate any necessary supplies.

How far from an urban area should you build an underground bunker?

As far as possible. Ideally at least 2 tanks of gas (approximately 800 miles) however you must balance this with your home location and your ability to visit the bunker several times a year.

What are some other uses for the land where I've built my underground bunker?

Vacationing, hunting and logging are all good uses for the bunker plot.

The definitive guide to underground bunkers. All your ‘why’, ‘what’, ‘where’, ‘how’ and ‘what to stock it with’ questions answered.

10 Reasons to Build an Underground Bunker

There are many reasons to build an underground bunker given the threats we face in this modern age. Here are 10 reasons why you should consider building one.

Underground Bunker Prices: How Much Do They Really Cost?

The full story on underground bunker prices. Whether you go the DIY or commercial route we'll cover it all, from air filtration to waste management.

DIY Underground Bunker Plans: If You’re Going To Bug In, Do It Right

Is bugging out not a viable solution for your family? Perhaps you should consider these DIY underground bunker plans to help alleviate the cost.

An array of questions and concerns to consider on the topic of bunker design, which is one of your best hedges against serious disaster.

Have you really taken the time to think about what is required to supply your bunker properly? Here is a list of 9 essential bunker supplies you will need.

How To Waterproof Your Tent and Keep Warm – Survival Camping Tips